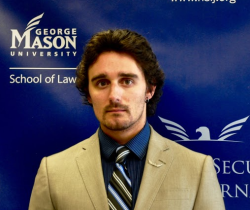 Originally from the great state of New Jersey, Mr. Jackson moved to the D.C. area to pursue a career in national security. He is currently a third year student expected to graduate in 2016. He is working toward completing Mason’s Homeland and National Security Law Concentration. Mr. Jackson represented GMU in Budapest and Vienna during the Vis Moot International Commercial Arbitration Competition in 2014-15 and plans to do so again this academic year. His article, Terror in Mexico: Why Designating Mexican Cartels as Terrorist Organizations Eases the Prosecution of Drug Traffickers under the Narcoterrorism Statute, will also be published in NSLJ’s Fall 2015 issue.