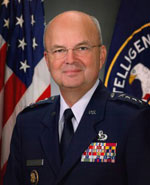 February 5, 2013 — The National Security Law Journal of George Mason University School of Law is pleased to announce that General (Ret.) Michael Hayden will headline its inaugural symposium. General Hayden is the former director of the National Security Agency and the Central Intelligence Agency.

Hayden currently serves as a Principal at the Chertoff Group, where he specializes in worldwide intelligence matters and cybersecurity.

The symposium topic is Defending Against Cyber-Intrusions from State-Sponsored and Civilian Hackers. Hayden will be joined by Suzanne Spaulding, Deputy Under Secretary for the National Protection and Programs Directorate at the U.S. Department of Homeland Security, and Ronald Lee, a Partner at Arnold & Porter. Dr. Mark Troutman, Associate Director of the Center for Infrastructure Protection and Homeland Security at George Mason University, will serve as the moderator.

The event will take place on Tuesday, April 2, 2013 at the Washington, D.C. law office of Arnold & Porter LLP. The reception will start at 6pm, and the panel discussion will start at 7pm. The event is co-sponsored by the Center for Infrastructure Protection and Homeland Security and the International Law Section of the D.C.  Bar.